Russia has invaded the Crimea in the Ukraine. This will put Russian natural gas deliveries at risk to the EU as 80% of Russian gas flows though Ukraine.

We have completed our Ukraine report for a client and they have been kind enough to permit us to release it to the public. Under normal conditions our reports are confidential.

The PDF is available at Ukraine Russia March 2014 situation PDF

Russia supplies roughly 25% of all natural gas used by the EU. Of this amount, 80% is in transmission lines that traverse Ukrainian territory. Due to rapid regional instability in the security situation in the Ukraine, there is a large increase in likelihood of a civil war or a Russo-Ukrainian war in the next (6) months. This will result in a major disruption of at least half the natural gas capacity to go off-line. Resulting in a significant increase in the regional price of natural gas to eastern Europe. The disruption may last from 1 week given a political skirmish to 9 months in the case of a full blown shooting war.

Modeling the political situation with 9 clearly defined indicators, the forecast on a major disruption of the Ukrainian pipeline is 66% as of today.

The Naftohaz Ukrainy – Gazprom pipeline has been a contentious problem since the fall of the Soviet Union. Based on multiple gas shutoffs during the last 24 years, the naïve chances are roughly 25% that a disruption will occur any given year.

Further nationalistic complications have arrived, Russian troops have invaded the Crimea and Kiev is considering it a declaration of war.

We have modeled the current political situation using a Bayesian Network with the important events tracked as the following:

Given the loose affiliation Crimea has with the Ukraine, as a semi-autonomous region, we expect Crimea to consider independence under pressure from Russia. Such a declaration enhances the chances of a civil war, but only slightly.

Russia has seized the main airport and blockaded ground routes to Crimea, we assume to impair Ukraine’s ability to transport troops to reinforce local units. Consequentially, Russia can now layout the plan on their timetable and not Ukraine’s.

Internal Ukrainian shaky leadership and questionable combat effectiveness will hamper their ability to deal with the Russian invasion of Crimea quickly. The Crimean support of the Russians will undermine Ukraine’s moral high ground with any international PR spin they put on this. Ukraine knows Russia has superior fighting force and will, this is Russia’s game to play.

Modeling the political situation with 9 clearly defined indicators, the forecast on a major disruption of the Ukrainian pipeline is 66% as of today.

MOST LIKELY COURSE OF ACTION:

The likely unfolding of events, based on our model is Ukraine declaring a limited war (61%), Russia occupying more of Crimea beyond the 02MAR14 boundaries (81%), Crimea declaring independence (64%), and no internal civil war occurs (22%). Given those events happen there will be a disruption of the Ukrainian natural gas pipeline (91%) for a few weeks.

MOST DAMAGING COURSE OF ACTION:

The unfolding of the worst case would be Russia occupying more of Crimea beyond the 02MAR14 boundaries (81%), Ukraine begins a diplomacy-only option to extract the occupying Russians (20%), Crimea declares independence (64%), Russia propaganda flames past hatred to get civilian Crimeans populations to attack non Russian speaking Ukrainians and it spirals out of what the occupying forces can control. In the north, Ukrainians begin to attack Russian speaking Crimeans and the government becomes inept from infighting. Civil war breaks out (28%). Given those events happen there will be a disruption of the Ukrainian natural gas pipeline (95%) which will take months to repair. 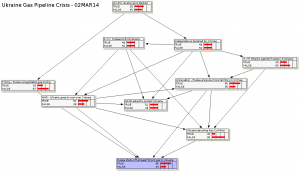 All the probablistic nodes evaluated for the 02MAR14 report

(Probabilities given in this report are conditional to other events occurring and cannot be taken out of context.)