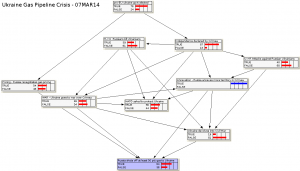 The Russian invasion of the southern part of Ukraine continues to fester tensions in the region.  We’ve updated our forecast to show developments as we see it:

Overall, the net effect is to lower the chances of a natural gas pipeline shut down to 64%.